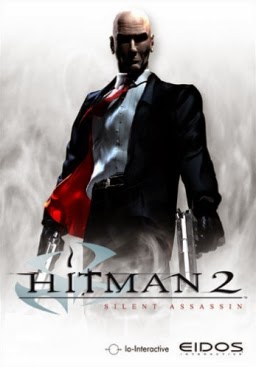 About a year ago I bought the Hitman Trilogy HD for the xbox 360.  It was a good deal and it seemed that Hitman was one of those games that many people have played and that people know about, so it was something that I should be playing to gain at least a passing familiarity with it.  The trilogy did not include the original Hitman: Code 47 (which I guess was a Windows-only) release so I started the series with the first item in the Trilogy: Hitman 2: Silent Assassin.  As always there are spoilers in these posts, so if you haven't played the game, don't go any further unless you want spoilers.

The whole plot of this second game in the series revolves around 47 (the assassin) trying to rescue his friend, father Vittorio, who took him in (at a Sicilian church) and I guess was trying to help him redeem his soul.  The game starts off with the church being assaulted and Vittorio being kidnapped. 47 proceeds to ask for her from "the agency". where he used to get contracts from, in order to get clues as to who kidnapped his friend so as to mount a rescue.  This, of course, isn't simple so you go from mission to mission, and in the end you are told that the person who hired you for all those contracts was actually the guy who kidnapped Vittorio (oh oh!). Well, it sucks to be him because in the end you kill him. The bad thing is that Vittorio dies in the end, giving 47 a rosary to help him on his path to redemption. 47 hangs it up on the door to the church and walks out, basically taking the attitude "I am what I am"... errr... OK... I guess self-improvement might not be something on the top of the list for a contract killer.

The game wasn't bad per se, it was just very rough around the edges.  Characters, when speaking for instance, would not have any facial muscles moving so it seemed like they were ventriloquists. I guess this is something that one might expect from a game that came out originally in the original xbox and PS2 era. Despite the name, "silent assassin"  my game play was less "silent assassin" and more "postal". I could have been more silent, but what's the fun in that? - especially when the HD graphics don't really do much for the story? I actually wanted to like this game, but it didn't really suck me in as much as other games, with better stories. All things considered I'd give this game a 6.5/10.

I know I got one achievement from this game, but I am not sure what the total is.  I think I will have to wait until I finish all three before I can get a tally of what I earned.
Ο Φοβερός
Comments