So here's a recent game I completed! (woohoo!) I finished this one in November 2021 (last week actually), and I thought I'd write up some quick thoughts about it. 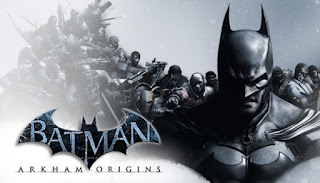 I have about a dozen games (mostly trilogies, or parts of trilogies) still on disc from the xbox 360 days - so I thought I'd work through my backlog of games on disc, so I can move most xbox 360 stuff into storage.  Batman Arkham Origins is essentially the story of how (or rather why) Arkham asylum was created; the short version is that Blackgate prison couldn't hold the criminally insane (in fact Joker escapes from Blackgate during the game after you've captured him the first time!).
I do love Gotham's dark and snow landscape. One of the things I really enjoy about the batman games of this style is the ability to glide and grapple within the environment. I also really enjoy the street brawler aspects of the game.  While I did get the silent predator achievement for not alerting nearby enemies and doing everything stealthy, my preferred gameplay style is going in and beating the bad guys down. My observation from this game is that Bruce Wayne definitely has childhood traumas that he just ain't dealing with... 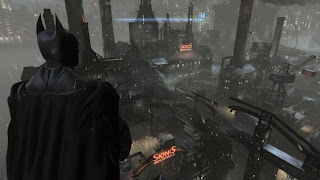 On Christmas Eve, Batman intervenes in a jailbreak at Blackgate Penitentiary led by Black Mask, who executes Police Commissioner Loeb and escapes. Left to battle the hired assassin Killer Croc, Batman prevails but learns that Croc is the first of eight of the world's deadliest assassins in Gotham City vying to claim a $50 million bounty placed on Batman's head by Black Mask. Hoping to learn Black Mask's location, Batman tracks the Penguin to his ship. There, he defeats assassins Deathstroke and Electrocutioner and learns from the Penguin that Black Mask was purportedly murdered at an apartment complex. Batman investigates the murder scene, learning that the victim was not Black Mask and that the murder may have involved a criminal known as "the Joker".

Needing more information to solve the case, Batman breaks into the GCPD to access its national criminal database. While escaping, he encounters Captain James Gordon, who is distrusting of Batman, and the corrupt SWAT team, who hope to collect the bounty money for themselves. Following advice from Gordon's daughter Barbara, Batman enters the sewers beneath the GCPD for permanent access to the database and finds Black Mask's crew planting explosives. Using the database, Batman deduces that Black Mask was kidnapped by the Joker, presumably to access the Gotham Merchants Bank. At the bank, Black Mask removes his disguise for Batman and reveals himself as the Joker; having assumed Black Mask's identity several days prior, the Joker seized his criminal empire and imposed the bounty on Batman. Batman chases the Joker to the Sionis Steel Mill, where he frees Black Mask and defeats the poisonous assassin Copperhead.

Tracking the Joker to the Gotham Royal Hotel, Batman discovers that the villain and his men have filled the hotel with explosives, murdered the staff, and taken the guests hostage. The Joker berates the assassins for their failure to kill Batman, throwing Electrocutioner out a window to his death: Batman recovers his electric gloves. The assassins leave, except for Bane, who thinks Batman is coming for the Joker. After traversing the building, Batman finds the Joker on the roof but is forced to battle Bane. Thinking Batman is outmatched, Alfred alerts the police so they will intervene. As Bane escapes by helicopter, he fires a rocket at the Joker, who is thrown from the hotel by the concussive force. Batman saves the Joker, leaving him with the police. Puzzled by the events, the Joker is imprisoned in Blackgate under the care of Dr. Harleen Quinzel; he tells Quinzel that he and Batman were destined to meet.

In the Batcave, Alfred begs Batman to abandon his crusade, fearing he will die, but Batman refuses. Batman learns that Bane has deduced his true identity as Bruce Wayne. Firefly attacks the Pioneers Bridge, forcing Batman and Gordon to work together to incapacitate the assassin and his bombs. Meanwhile, Bane breaks into the Batcave and nearly kills Alfred. Batman finds the cave in ruins and Alfred dying, but he is able to revive him with Electrocutioner's gloves. Elsewhere, the Joker has taken over Blackgate after inciting a riot.

Realizing he needs allies, Batman works with Gordon and the police to retake the prison. Sitting at the electric chair, the Joker offers Batman a choice: kill Bane, or allow Bane's heartbeat to charge the chair and kill the Joker. Batman uses the electric gloves to stop Bane's heart. Satisfied, the Joker leaves, intending to detonate bombs placed around the city. Batman revives Bane, who injects himself with a steroid that transforms him into a hulking beast. He loses the ensuing battle to Batman and suffers amnesia as a side effect from the steroid, thus preserving Batman's secret identity. With Gordon's help, Batman locates the Joker in the prison chapel. Dismayed that Bane is still alive, the Joker tries to goad Batman into killing him but Batman subdues him instead. Gordon chooses not to pursue Batman, believing he can help the city.

In a radio interview during the credits, Quincy Sharp says he will lobby to reopen Arkham Asylum to house the city's worst criminals; after the credits, an imprisoned Deathstroke is approached by Amanda Waller to join her Suicide Squad 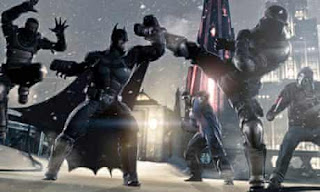 Overall this was a fun game! I got through the story, but I really didn't do all the extra collecting tasks, like unlocking Enigma towers, finding all of the extortion tapes, completing the various challenges, etc.  Maybe something for a replay. But for now, more backward compatible games call on me!