OK...yes...I am still talking about Spain even though I've been back for two weeks now ;-)

I am catching up on some things that I wanted to blog about while I was away - namely in-flight entertainment.  Heading over to Europe is usually sleep-time on the plane, so I don't get to see a ton of movies, but coming back we're going back in time (so to speak) and that allows for some additional movie time.  The movies in-flight are modified, with some really bad voice-overs some times to replace saucy dialogue, such as replacing Samuel L. Jackson's "I've had it with these motherf*cking snakes on this motherf*cking plane"  with "I have had it with these monkey fighting snakes on this Monday through Friday plane!" (from the movie snakes on the plane).  That said, despite some dialogue changes (and probably some scene deletions), the movies were pretty fun.  So here are some brief thoughts on what I watched (Boston-Istanbul, Istanbul-Barcelona, and the return flights) SPOILERS AHEAD:

San Andreas - 8/10
I don't often  watch natural catastrophe movies, but I've noticed that I usually do so when I am traveling via plane (wonder if that means anything).  San Andreas was on my list of movies to watch at some point, and since I was on a 10 hour flight, it seemed like a good time to watch something with action that would also keep me awake.  The premise of the movie is that a major earthquake hits the east coast of the USA and all hell breaks loose.  Dwayne (the Rock) Johnson is a former combat pilot who is now working as a search and rescue helicopter pilot.  The movie is about survival, and about families coming back together (he is divorced, she is dating an idiot, said idiot falls out of favor, she and the rock get back together).  Pretty predictable, but for an action movie it wasn't that bad.  Even on a small (7-inch?) in-flight entertainment monitor the movie was pretty good; and I didn't notice any major edits or cuts to the film of the "Monday through Friday plane" variety 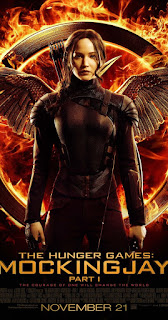 Hunger Games: Mockingjay part I & II - 9/10
I don't remember when the second movie came out in the Hunger Games series, but I do remember that I did not see "catching fire".  I did see the first one on my last flight (was that going to Edmonton?) but I missed the second movie (not on Netflix or something when I was interested in seeing it).  Anyway,  I don't know how much I missed by not seeing the second one.  Watching these two (back to back on the the flight back) gave me the impression that somethings happened but I was able to fill in the blanks by what was said and referenced.  These two movies together were pretty good.  I liked the action, I liked the story, and I liked the lead-up to the end.  Even though I hadn't seen Catniss' sister much in the first one, it was one character who I as really annoyed that they killed off.  I get why she was killed - to propel catniss to go on with her mission of overthrowing whatshisface but it was rather sad.  The underlying morals of the story (which I took to be absolute power corrupts absolutely) were pretty evident.  Overall it was a great movie.  I still can't believe that these were books written for a younger audience. Then again, I watched some pretty gory stuff when I was a kid...so...welcome to dystopia, kids!


Dawn of the planet of the Apes -- 9/10
This was another movie I liked very much.  I think I've seen all of the rebooted movies in this franchise.  There really isn't much to say about this movie other than the world has gone to hell in a hand-basket, humans are foraging and trying to survive,  very intelligent and linguistically developed apes are doing the same; each tribe as their boundaries - conflict ensues when boundaries get crossed.  The Apes have one high law, which is ape not kill ape.  Guess what?  Apes does indeed kill ape, and the apes realize that they aren't that far from their human cousins in duplicity and ambition.  It's a little depressing if you think about it (I was hoping that they take the higher moral ground).    The movie was a fun action movie, and I hope they make more of them to continue to explore aspects of humanity through this metaphor.


Steve Jobs -8/10
When I started watching this documentary-style movie I thought it would include much more. Then again, how can you do an entire biography of a person in 2 hours?  The movie focused a lot on Steve Jobs' history with key focal events being various keynotes for products that he gave for Apple or NeXT.  Some aspects of this I already knew (having been a MacHead for the past 25 years), and some things were new.  I haven't read the last biography yet (something to read after I am done with my dissertation).  That said, despite my initial disappointment at only catching up during keynotes, I think the movie was well done.  The guy was definitely eccentric, and downright nasty, but some good things came out of Apple during his tenure at the helm.  I missed the last 10 minutes of the film since we were landing, but I don't feel the need to go back and see the rest.  It was good enough for what it was.


Star Wars: Revenge of the Sith - 7/10
I don't particularly care of the prequels, and Star Wars isn't on top of my list like Star Trek, so it took me a while to see this movie.  The last time I was on a flight (probably to Edmonton) I saw the Attack of the Clones.  I don't fully remember it, so I skimmed through it before I started the Revenge of the Sith.  I remembered most of what happened, so here we were, in a flight - watching the last prequel.  It wasn't a bad movie, but it was underwhelming.  Compared to the sequel to the original trilogy that came out recently this one was something to be taken from the value bin in terms of its quality.  I am glad I watched it, for completionist's sake, but I don't like how neatly the Jedi order was decimated.  It doesn't seem plausible to me. 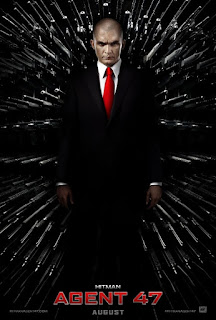 Agent 47 - 8/10
Hitman: Agent 47 is an adaptation (I would say a parallel storyline) from the popular video game series Hitman.  In this movie the Hitman (47) is tasked with finding the person who created the genetically engineered humans who are hitmen, and find his best creation (90) so that she can be cloned and those clones used for no good.  It's an interesting action movie, and I think it did a good job with tying into the video game lore (I've played everything except the original, and the most recent episodic titles).   At the heart of it, this movie is an action movie (just like the games) so a lot revolves around action that keeps you on the edge of your seat (good if you are in a flight and nowhere to go for a few hours).  I'd personally like to see a sequel to this movie.


Independence Day 2: Resurgence - 9/10
ID4: 2!  The sequel we've been waiting 20 years for!  I wanted to see this movie in the theaters, but considering the bad reviews, and the lament of the lack of Will Smith, I decided to wait for it.  Luckily it was available on the flight back!  So, time has passed, earth is quasi-united, and the aliens come back.  The humans strike down a probe that we find out is here to help us (good job humanity!) The aliens who attacked us originally have done this to other civilizations and the probe is from a civilization (now extinct) who helps affected worlds migrate, and hopefully provides them with what they need to start a militia to fight back.  At the end of the movie humans win (of course) and with the knowledge we have we can reach out to those civilizations and start organizing a front against these magma-sucking aliens that are bent on destroying planets.  There is an element in this movie of sentient-life-created ecological disasters that could be a bit more on the nose if they wanted it to be.  This movie was really good - much more than I expected. However, for the edited version of the flight I noticed several bad monday through friday moments, and some bad scene cuts.  Oh well.  I sure hope there is a sequel!  I will be sort of like Starship Troopers meets Falling Skies.

Mission Impossible: Rogue Nation - 8/10
Another movie I've been waiting to watch forever.  Another mission impossible movie.  Quite procedural, but I liked it nevertheless.  Not much to say other than I liked Baldwin, Jeremy Renner, and Simon Pegg in it :)  Now, make another sequel! :-)