Alright.  Here is another review from back when I had gamepass and I tried to play as much as I could 🤣.  I think that my general review of Rise and Shine is that THIS. GAME. IS. PUNISHING.😬😩😵
Rise and Shine is an action platformer. In this game you are on Gamearth (basically a planet where everything is a game reference from our world). Gamearth was once a peaceful planet that is now threatened by the warmongering Space grunts of Nexgen. Gamearth is mostly 8bit game and 16 bit game related content and characters, while Nexgen seems to be more xbox/PS1 and beyond.  Anyway, in the aftermath of Nexgen's devastating first strike a child named Rise is forced to take on the sacred gun Shine - and with it the fate of his world.

The game plays up on game nostalgia, and if you've been playing games for a while you'll notice certain key phrases and references, like "it's dangerous to go at it alone". 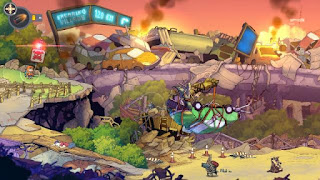 Overall, I enjoyed this game, despite its punishing nature.  I don't know how anyone would finish this without dying even once, but hey, that's just me.  I don't intend on playing this again any time soon 🤣.  For me, this is an 8/10.