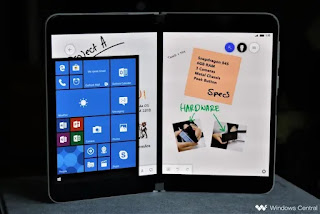 The other day Windows Central published a look at Microsoft's canceled mobile operating system, codenamed Andromeda. This was going to be the next iteration of Windows Mobile, which bit the dust.  It's too bad, because I think that Microsoft had something there with the whole Metro UI, and they could have bankrolled the OS until it caught on, but the janky transition from WM7 to WM8 to WM10 and the incompatibility between the versions as far as apps went really meant that it was DOA.  I really don't get how such a big company can bungle it up so bad.

Anyway, this OS was meant to run on the folding device known as the Surface Duo, which was also canceled, but made its way back with android (and spoiler alert: Microsoft is poorly supporting this too!)