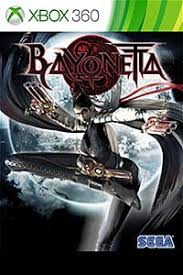 Well... I guess I'm done with it not in the "I've completed the game" aspect but rather, "I got to a point and got tired of it" :p .  A month or so ago I thought I'd start Bayonetta on the xbox.  Not that I have a ton of time on my hands with the dissertation proposal going on, but hey, it should have been a fun diversion.  In the game you play as...you guess it...Bayonetta.  A witch on a mission.   The story unfolds partly through present day exploration in the town of Vigrid (fictional European city) and partly through flashbacks.  Here's the brief Wikipedia write up on the setting:

Bayonetta takes place in Vigrid, a fictional city in Europe. The title character (voiced by Hellena Taylor is a witch who shapeshifts and uses various firearms, along with magical attacks she performs with her own hair by summoning demons to dispatch her foes. She awakens after a 500-year sleep near Eggman's tombstone and finds herself in an unfamiliar area with no memories of who or what she is. Over time, she begins to remember what caused her current predicament. 500 years before the incident that caused Bayonetta's memory loss, there were two factions preserving the balance between darkness and light in the world: the Umbra Witches, who are followers of darkness, and their counterparts, the Lumen Sages, who are followers of light. The factions shared two distinct treasures, the 'Eyes of the World' (separately named the 'Left Eye' and the 'Right Eye') which they used to oversee the just passage of time. Both factions mysteriously disappeared from Vigrid under unknown circumstances. Bayonetta still has an ornate piece of jewelry which contains a small red gem, and believes this gem is the Left Eye of the World. While searching for the Right Eye, she often receives flashbacks that make her remember what caused her current predicament.

I got to chapter 9 of 16 which is I stalled. The battle I got stuck on was the out of body battle where you have to have an out of body experience to destroy the enemies coming after you.  Of course your physical body, and your astral projection both take damage by the enemies, so if you get hit 5 times you fail.  If you take take more than 2.5 minutes to kill the enemies, you fail.  And the enemies keep coming and coming.  After 3 weeks I decided to give up.  No amount of strategy and button mashing could get me through this, and it was getting frustrating.  I think I need to restart the game in easy mode (not normal difficulty) in order to get through this - but playing 2/3 of the game that I've already played doesn't really appeal to me at the moment.

The game mechanics seem pretty hack-n-slash (or rather, since you don't really have hacking weapons, it's more brawling in nature).  Bayonetta goes through the game beating the heck out of her enemies, and so long as she dodges attacks her super-attack meter energizes, allowing her to dole out punishing final moves.  The visual style looks very much like an anime taking place in a fictional eastern European town where witches and Angels and creatures of light and darkness fight it out.  The Angel design reminds me a lot of Neon Genesis Evangelion in their visual language.  There are also quite a few easter eggs in the game, from a character named Eggman, to Bayonetta collecting rings for her kills,  to a jab toward Capcom's Devil Man Cry.  That's what I've noticed thus far - I am sure there are more.  In between fighting there are cutscenes.  A. lot. of. cutscenes! I'd go so far as to say that this is basically an anime movie punctuated by some user interaction (the collected cutscenes stitched together are about 2.5 hours!)

Metacritic gives this game a 90%.   I'd personally give it a 70%.  It's a nice game, with what seems like an interesting story, but the big flaw is that some parts are way too button-smashy for my taste, and it keeps the player from making progress in the game.  Overall, 14 achievements in (200/1000 points), I decided to give up.  Since it plays on the xbox one, I might pick it up again in a few years :p

Have you played this game? What do you think?
Ο Φοβερός
Comments