Catching up on my quick thoughts on games that I played a long time ago (or so it seems!).  This one was completed on 5/31/2020 and it was a game that I had access to on Gamepass

The story from Wikipedia:
The game takes place ten years after the events of Streets of Rage 3, in which the criminal mastermind Mr. X was finally defeated. Initially thought to be in peace, Wood Oak City falls under the control of a new crime syndicate led by Mr. X's children, the Y Twins, who are planning on brainwashing the city by using hypnotic music. Learning about this corruption, Blaze Fielding calls in some old favors to take the twins down. Joining Blaze are her old friends Axel Stone and Adam Hunter, Adam's daughter Cherry Hunter, and Floyd Iraia, a cybernetically enhanced apprentice of Dr. Zan 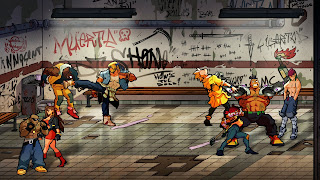 In the end, this is actually a game I'd buy and play again. It had the right mix of nostalgia and modern elements to make it worthy and replayable, whereas double dragon did not.  The one thing I liked more in DD was the soundtrack ;-)